‘The people in this neighbourhood live longer, healthier lives’

Focus on healthy living environment is ever more important

How do you make a living environment healthier? What is the impact of (more) greenery in the neighbourhood or car-free zones? And how do you encourage social cohesion in the area? In the Data and Knowledge Hub Healthy Urban Living, knowledge institutions, government, the business community and residents work together to create a healthy living environment. One of the pilots is the Cartesius Triangle in Utrecht: a car-free neighbourhood comprising 2,600 homes, a school, a supermarket, restaurants, various other facilities and a large, central park. The aim is that residents of the neighbourhood will live five years longer in good health. Roel Vermeulen (Utrecht University) and Armand Paardekooper Overman (from architects Mecanoo) talk about the Utrecht-based ‘living lab’. 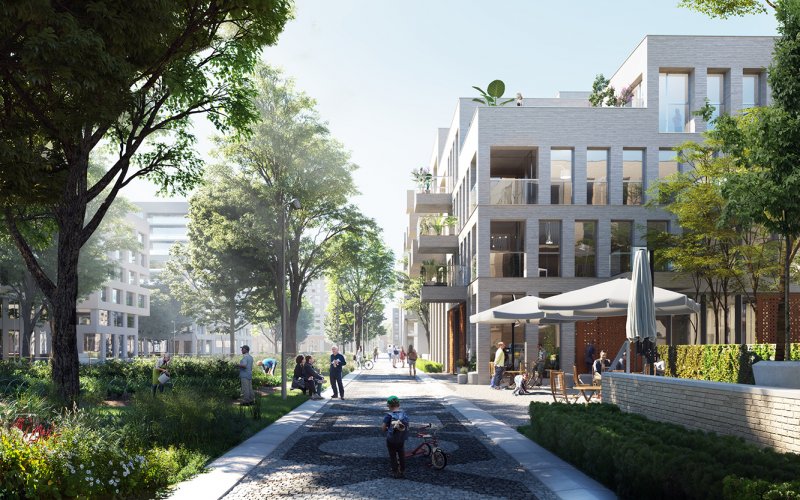 ‘In Utrecht, the difference in life expectancy between Overvecht and a healthy neighbourhood like Tuindorp is twelve years. The government wants to reduce the health differences between neighbourhoods. Overvecht is a very green area, but it’s definitely not the healthiest. It seems that simply providing more greenery in the neighbourhood is not enough. Accessibility, safety, social cohesion and fulfilling the needs of local residents also play a role.’

Making our living environment healthier
Roel Vermeulen can talk passionately about his research for hours. The Professor of Environmental Epidemiology and Exposome Science at the Faculty of Veterinary Medicine is one of the founders of the Data and Knowledge Hub Healthy Urban Living and has a mission: to make our living environment healthier. And in this he is clearly not alone. The time is ripe for a new phase in the development of urban and rural areas. In his view, if the coronavirus pandemic has taught us anything, it is that living structures are more important than ever.

Fifteen-minute cities
‘In the 1970s, we built cities where people worked in the centre and lived in the surrounding neighbourhoods. Neighbourhoods became mega cities. But now we want to get back to small-scale neighbourhood structures where everything you need is no more than fifteen minutes away: “fifteen-minute cities”. How you design a neighbourhood determines to a large extent how people behave. Take readily available green space, social cohesion and healthy food, for example. The burden of disease directly related to the living environment and surroundings is 4%. That’s 13,000 premature deaths a year. Add to that the fact that behaviour is determined to a large extent by our living environment, and the importance of the living environment increases still further.’ 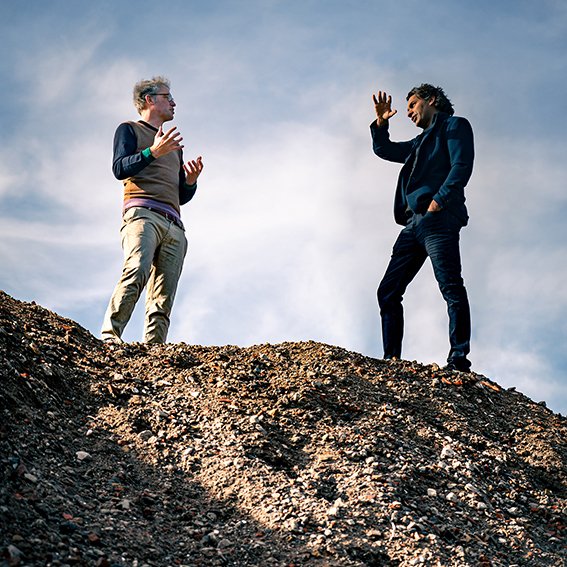 Roel Vermeulen and Armand Paardekooper Overman brainstorming on the site of the Cartesius Triangle construction project in Utrecht.

Attention to health and well-being
By 2030, more than 80% of the Dutch population will be living in an urban environment. Consequently, areas must be developed and new houses built without delay. In addition, attention must be paid to issues such as climate change, energy transition and sustainable food chains, and, above all, to the health and well-being of the people who live, work and meet there. Developing and maintaining a healthy living environment is therefore crucial, says the website of the Healthy Urban Living hub. To Vermeulen’s surprise, there was a great deal of interest in participating in the project. ‘I never expected that major players like Mecanoo and Heijmans would want to get involved and I certainly didn’t expect them to be showing such interest in the first few months. I’m delighted they did, though.’

How do you make a living environment healthier?
‘You can do it by changing individual behaviour, but we know that’s not very effective,’ replies Vermeulen. ‘It’s better to change structures and policies, such as building a good cycling infrastructure or raising taxes on cigarettes. The idea behind the hub is to bring about structural changes. We realise that there is a real need for this, among the population, the municipality of Utrecht and the province. Developers, construction companies and architects/planners also regard healthy urban living as an important criterion. We already know a great deal about air quality, for example, but we know far less about many other factors in the living environment. At present, what municipalities and provinces do is often not evidence-based – we don’t yet know the impact. That’s where science comes in.’

Master plan for new district
Since its kick-off in May 2020, the Data and Knowledge Hub has launched eight projects. One of these is the new urban district of Cartesius Triangle in Utrecht, a former Dutch railways (NS) site which the hub has now adopted as a ‘living lab’. MRP Development and Ballast Nedam, together with architects from Mecanoo and concept developer Urban Sync, applied for a tender issued by the municipality of Utrecht and were awarded the contract. They developed a master plan for the Cartesius Triangle district – so called because of its location between the Cartesiusweg and the railway line. The new district will be developed in phases and will take a total of eight years to complete.

‘The slogan is that people in this district will live healthy lives for five years longer,’ says Vermeulen. ‘But how can we be sure about this and measure it? We need to analyse what happens. Not to have a stick to beat people with, but to gain an insight into why something does or doesn’t work. In this way, we can build a learning system together, which we can adapt constantly based on the knowledge we acquire along the way.’

Broad spectrum
For Mecanoo, health and quality for people, animals and the environment are starting point for every design, not just in this neighbourhood, says architect and urban strategist Armand Paardekooper Overman. ‘The idea behind a neighbourhood on this scale is that it should contribute structurally to a healthy life for everyone who lives there, works there or visits the area. It’s about the broad spectrum: not only housing, but also facilities, accessibility and socio-economic opportunities.’

‘Mecanoo’s office philosophy is “people, place, purpose” – in that order. That’s the challenge we’re facing globally. It’s great that we can realise this ambition so clearly in the Cartesius Triangle, especially in cooperation with the hub, our partners from Utrecht University and RIVM, as well as local entrepreneurs, Delft University of Technology and Wageningen University & Research.’

We really need each other
Both observe that a transition is happening and that the focus on health is becoming increasingly important. ‘This is a really interesting development,’ says Paardekooper Overman. ‘Are we building because we need to build so many houses, or because we want to create an attractive city where quality of life is paramount? The market, government, designers and scientists really need to join forces to make this happen, because no one can do this on their own. We really need each other. We must pool our knowledge and expertise; only then can we succeed.’

The fact that the municipality of Utrecht has embedded health in everything it does for a long time now is also important, adds Vermeulen. ‘This is also on the radar of urban regeneration projects. There has always been public support for the development of a healthy city, but the great thing is that policymakers and market players now also want to focus on health. By focusing on health, along with sustainability, you can stand out from the crowd as a market player. Mecanoo is leading the way in this field.’

‘By 2035, there will be two billion people worldwide without a roof over their heads,’ Paardekooper Overman adds. ‘Cartesius is just a small part of this big theme, but our wish, dream and ambition is that eventually we will move towards more equality for all. In the Netherlands, our processes and certain interests sometimes get in the way, but technically and financially we can do it. In many countries, that’s not always the case.’ 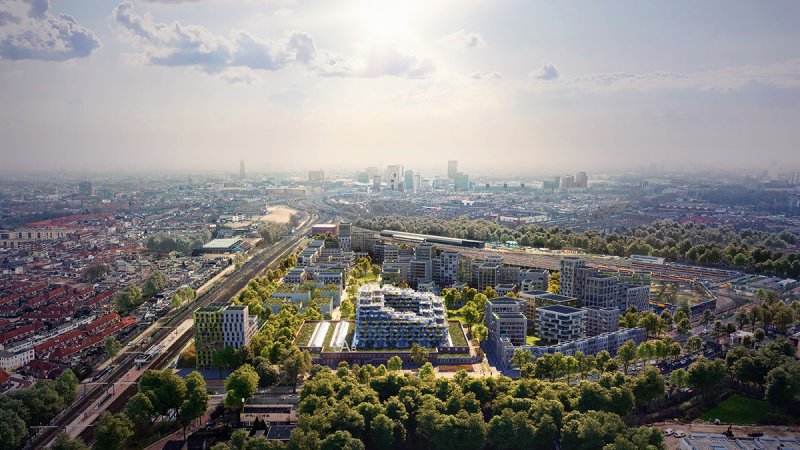 Green loop all around
The Cartesius Triangle will include some 2,600 homes. ‘That’s a huge number,’ the designer admits. ‘So we also take into account the scale at which people can still meet each other and know their neighbours. Research by Delft University of Technology has shown that a maximum of 20 to 30 apartments around a communal garden ensures that people still have a bond with each other. Roel also taught us that air quality and noise have a huge impact on your health, so we pay attention to that too. Worldwide, some nine million people die prematurely as a result of poor air quality. This area is close to the railway line and between roads. It’s been designed in such a way that there is a green loop around the entire district. The buildings within it will be away from the noise and the railway line. At the centre of the development, there will be a beautiful, green oasis for all the properties, a large central park. Creating a haven also involves considering people’s health and relaxation. Noise is an aspect that people often don’t think about, but it can have a huge impact on your mental health.’

What are the challenges?
‘This integrated approach is what makes it so complex,’ he replies. ‘You have to do it together, but you also have to be in it for the long haul, because we’re looking 20, maybe even 40 years into the future. It’s about the dot on the horizon and the short-term opportunities.’

‘That’s why this partnership is so great,’ agrees Vermeulen. ‘Science naturally looks at distant points on the horizon, but the market thinks more in terms of the present. That calls for a different way of working. However, I firmly believe that by doing this we will ultimately achieve our long-term goal.’ Paardekooper Overman: ‘We don’t yet know exactly what we can learn from each other, but we’re already putting as much as possible into practice and learning by doing.’

Ultimately, the world faces such a daunting task that a single neighbourhood or energy-neutral building won’t cut it"

They are also working on an urban regeneration project together in Dordrecht. In Leusden, there is a project with Heijmans (Maanwijk). The hub is also involved in the province of Utrecht’s Regional Deal for Healthy Neighbourhoods (Regiodeal Vitale Wijken). Vermeulen: ‘We’re committed to making all these “living labs” into a learning system.’

What is your dream?
The architect would love to see this way of working being accelerated and scaled up. ‘Ultimately, the world faces such a daunting task that a single neighbourhood or energy-neutral building won’t cut it. We have a huge amount of work to do. My dream is that we succeed in this.’

Vermeulen agrees. ‘I love that science can contribute to the development of urban design principles and that we can learn from each other. Together, we can really do something to help solve the big social challenges. If we achieve that, I’ll be immensely satisfied.’